Not all heroes wear capes, some wear custom-built boots. Meet Bear, the koala detection dog ready to take on another summer sniffing out koalas.

You may remember Bear appearing in social media feeds and across the news in the summer bushfires. The five-year-old Border Collie/Koolie cross with striking blue eyes and custom-built boots is an international hero, saving over 120 koalas in the 2019-2020 bushfire season.

Bear is member of an exclusive canine club. He is part of a team of four dogs trained by USC Australia’s Detection Dogs for Conservation (DDC) program. We caught up with Bear’s human friends to hear what he’s been working on and what he has planned for the summer. 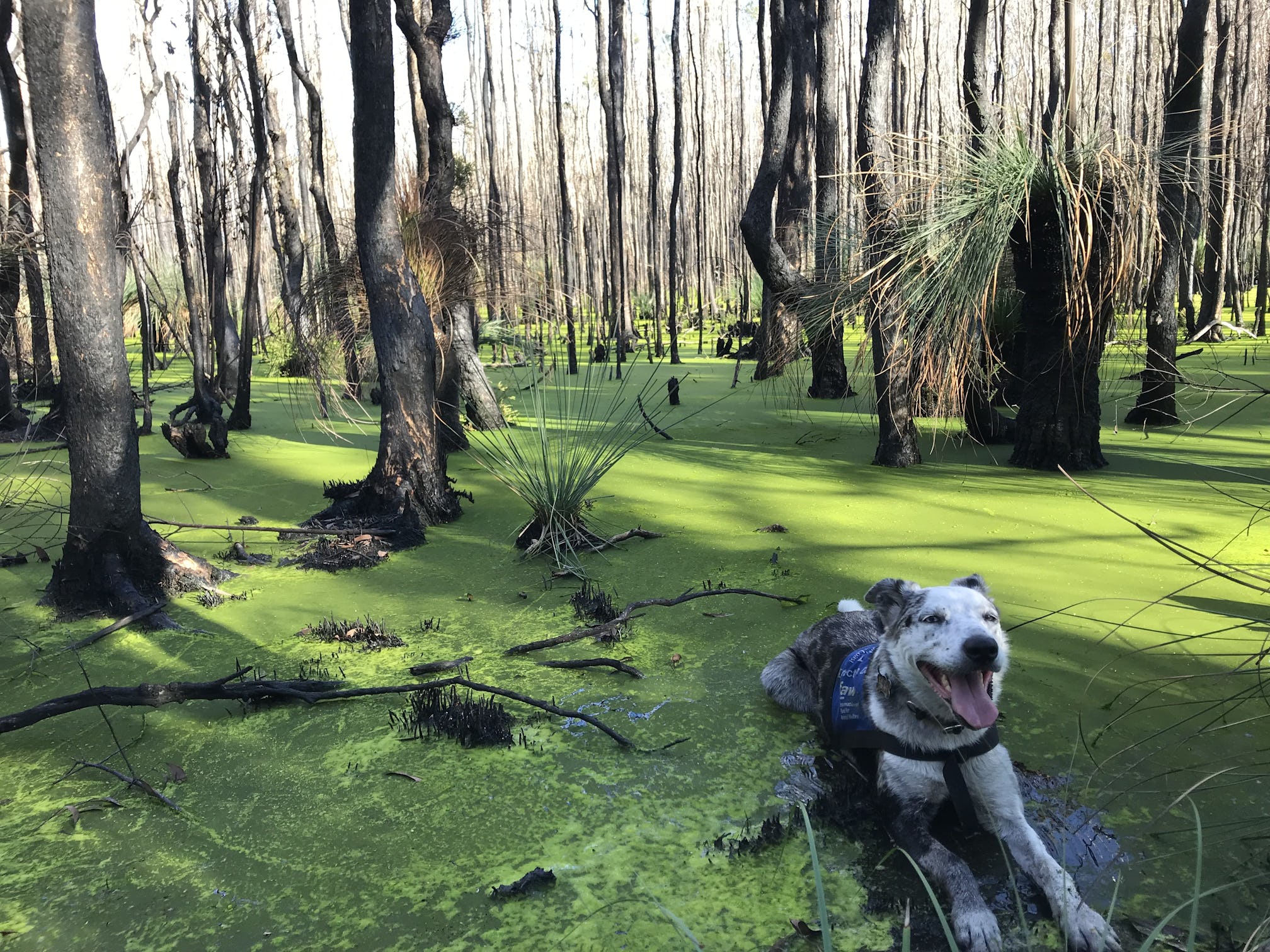 How did Bear become a detection dog?

Bear was abandoned and adopted several times – as he was a challenging pet with incredibly high energy and a little OCD. When IFAW and USC Australia’s Detection Dogs for Conservation (DDC) put the call out for koala detection dog recruits a few years ago, his owners surrendered him as they thought he would be well suited. His destructive behaviour was a sign of high energy and boredom. DDC started training Bear in 2016, with the help of IFAW funding and he passed his initial scent training with flying colours and was soon locating koalas in the wild. He was born for this!

I read that Bear saved over 100 koalas last year, is this number correct? If so, how are the koalas going and have they been released back into the wild?

Bear tracked and detected just over 120 koala survivors in the 2019-2020 bushfire season. Many of these koalas would not have been found without him.

Approximately 30 of those koalas were rescued and brought into care, while others were assessed in the field. These koalas have undergone extensive rehabilitation and many have been released back into the wild. Last month four koalas found by Bear were released back to Two Thumbs Wildlife Sanctuary near Cooma, NSW where Bear was deployed after the sanctuary was tragically destroyed in the bushfires. Eleven koalas were found and rescued by Bear including youngsters Mark and Jarrah, Jessie and Amelia (mum and bub) with a pouch joey Jazzy born after Jessie was brought into care. One of the koalas was named Bear after his canine rescuer and was successfully rehabilitated and released into the wild. 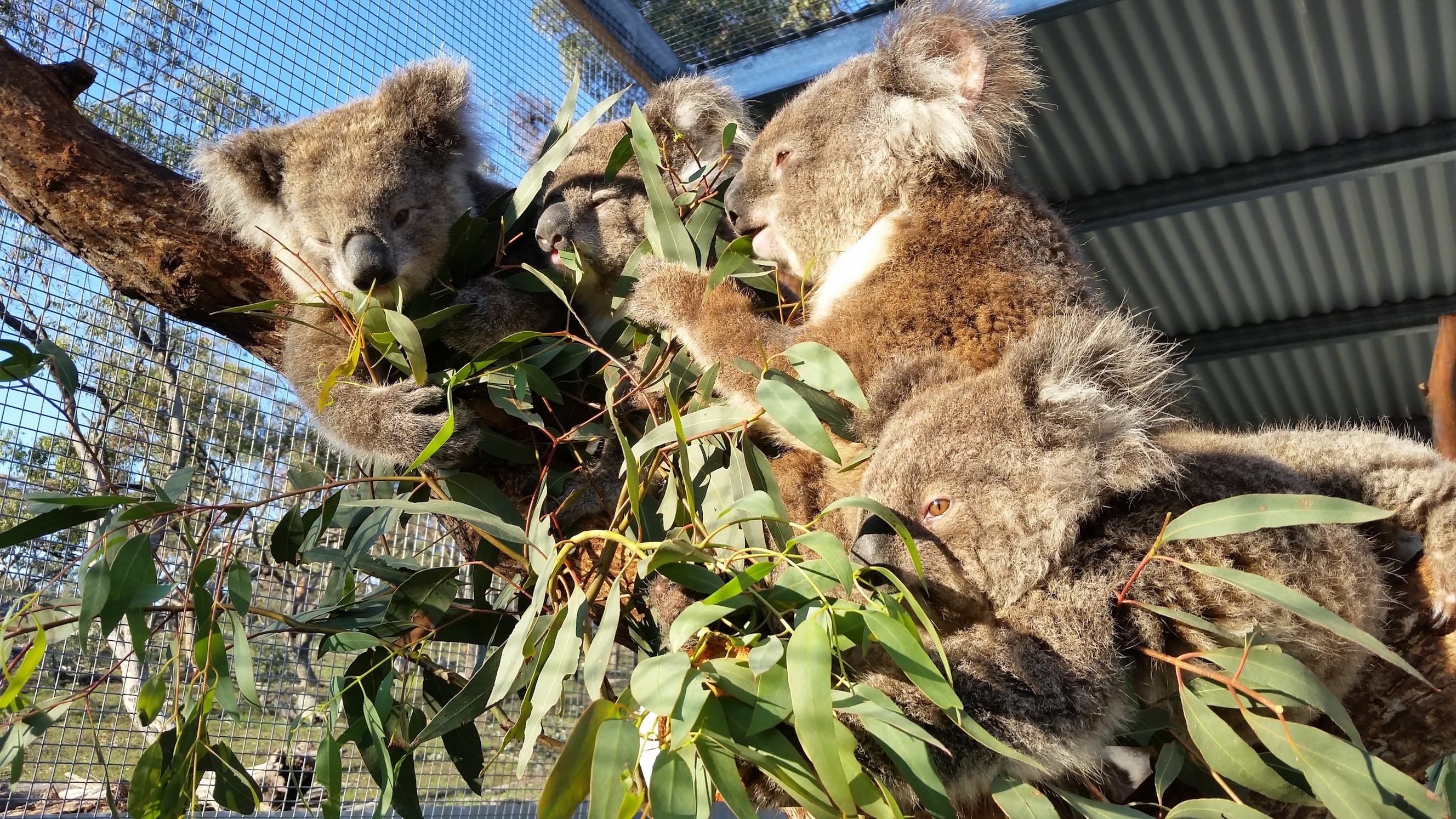 How long have wildlife detection dogs been around?

Dogs have likely held helpful roles for humans for as long as 20 to 40,000 years. It is thought that dogs and humans have associated for such a long time that their brains have coevolved. A dog’s sense of smell is up to 10,000 times stronger than a humans. They can smell what we can’t see. Dogs can be trained to detect the scent of almost anything. Their skills are vital in so many areas, particularly conservation.

Here in Australia they help us track all kinds of wildlife and they are particularly useful when it comes to detecting koalas. In order to protect koalas, we need to be able to find them, but they are elusive animals and hard to spot with the human eye. Dogs are an integral part of koala research and rescue work and detection dogs are most certainly the future for conservation.

In the African country of Benin, IFAW’s anti-poaching teams are training dogs to become an integral part of the solution for disrupting illegal wildlife trade. They are able to detect the transit of ivory, rhino horn and other illegal wildlife products through ports, airports, border crossings and other protected areas.

What makes a suitable detection dog?

Often the worst pets make the best detection dogs. High-energy, ball obsessed and a little OCD – not the ideal pet but that can happily spend hours in the bush with us. We also look for a soft nature with creatures big and small, this to ensure he would not be a threat to all the animals living in places we work (including National Parks). It is essential that detection dogs have 100% play drive and zero prey drive and no interest in animals. All of the dogs are trained using positive reinforcement techniques using reward rather than punishment. Bear has zero interest in koalas. The only thing he is interested in is his ball. 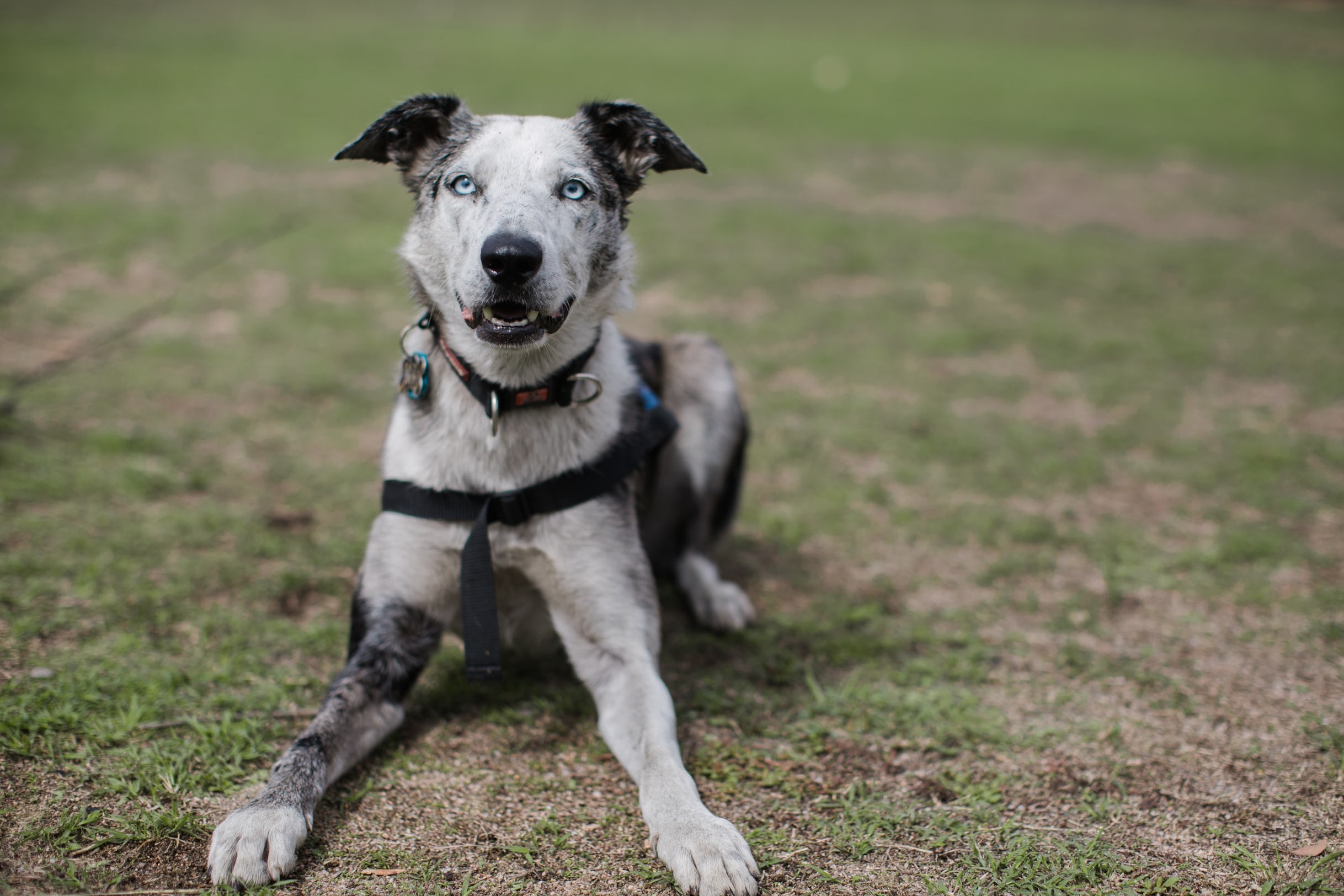 When did IFAW get involved with the Detection Dogs for Conservation and what was the motivation?

USC Australia’s Detection Dogs for Conservation team came to IFAW a few years ago and asked if we would like to rescue and train a dog to detect live koalas. We thought this was a wonderful idea. A couple of dogs were tested but didn’t pass the test and were rehomed. Then in 2016 along came Bear! The very qualities that made him a challenging pet made him a perfect detection dog as he is highly focused and motivated by his reward, his ball. He passed his initial scent training with flying colours and was soon locating koalas in the wild. His skills were invaluable in search and rescue efforts to locate koala survivors post bushfires.

What is Bear working on now and what’s planned for this summer?

Bear is conducting vital research with his canine colleagues into the impacts of bushfires on koalas. Together with detection dogs and drone technology, USC Detection Dogs for Conservation and IFAW are studying the impact of fires on the short and long-term health and resiliency of koala populations and habitats.

We’re currently conducting field research looking specifically at koala poo – there is a HUGE amount of genetic and health information you can get from a koala’s poo. Luckily koala poo is easier to find than the koalas themselves as they poop up to 100 times a day - they even poo in their sleep! The research will help us identify and assess key at-risk koala populations, and the dogs are key to this search.

Thanks to Romane Cristescu, Director and co-founder of Detection Dogs for Conservation, Josey Sharrad and Stacey Hedman from IFAW, and all the detection dogs. 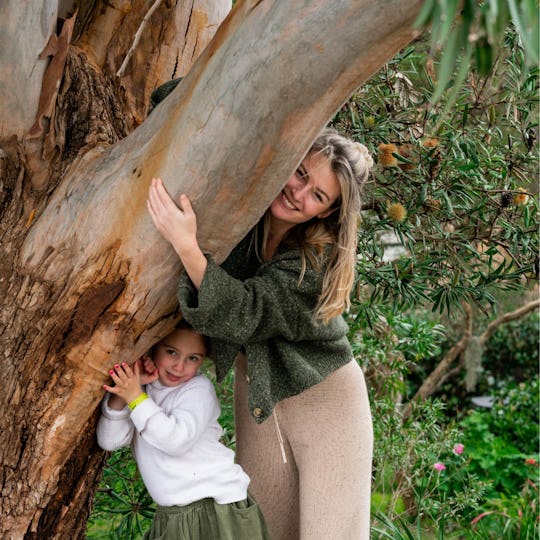 Jennifer joined the Planet Ark team to support the 2018 National Tree Day campaign. She is passionate about science communication with a focus on multimedia storytelling. Prior to joining the Planet Ark team she travelled to Jordan as a foreign correspondent. She works as a vet nurse in her spare time.