A swamp ecosystem stripped for agriculture over 200 years ago has been revived into a vibrant wetland by a group of dedicated ecologists.

The Walker Swamp in Southwest Victoria didn’t look much like a wetland when the Nature Glenelg Trust (NGT) started work on the area in 2018. Water had been diverted from the catchment area since the 1950s when the land started being used for cattle grazing ecologically depleted and by the early 2000s the land was being used only to support a monocrop blue gum plantation. 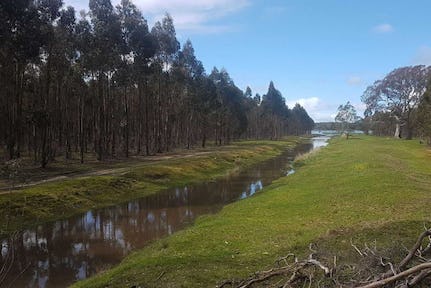 Walker Swamp prior to the intervention of Nature Glenelg Trust, dominated by a monoculture blue gum plantation.

Fast forward to today and thanks to extensive rainfall in early October last year Walker Swamp now looks like a wetland paradise, complete with floodplains, bird life and even a platypus or two. The incredible transformation can be attributed to the hard work of the NGT team, who had already implemented two wetland conversion trials in nearby agricultural areas before getting the opportunity to work on Walker Swamp.

How did they do it?

"We're rural people, practical people, we work with farmers a lot, science underpins what we do," Mark Bachmann, principal ecologist and manager with the Nature Glenelg Trust, told ABC News.

"There are no layers of bureaucracy; we are a very lean operation, but we get a lot done."

In order to turn back time in the area, NGT had to stump up the funds to buy over 1,000 acres of blue gum plantation land, strip it of the monocrop culture, wait for the rains to flood it and hope that they had done enough to encourage the wetlands to thrive again.

Wetlands are a critical part of our natural environment, providing natural water filters and habitat for flora and fauna that, in many cases, can’t be found anywhere else. Unfortunately, they are also becoming increasingly rare. According to WWF’s Living Planet Report 2020, approximately 85 per cent of wetlands have been lost due to conversion for agricultural or urban development purposes. This makes wetland revitalisation projects like that being carried out by the group of ecologists at the NGT even more important.

“When we put the water back into the landscape, the place transformed. There was a reversal of states,” Mr Bachmann said.

"When the soil is inundated for long enough, it completely alters the soil characteristics from aerobic to anaerobic [with oxygen to without oxygen], so all of a sudden the pastoral grasses make way for the native wetland plants to come back in…. all of a sudden this biodiversity response starts to happen like magic.”

Walker Swamp is now being used as an example of what concerted effort backed by science can achieve in terms of habitat restoration, biodiversity preservation and rewilding. In addition to continuing to monitor biodiversity at the site, NGT also runs educational tours of the area.

Positive Environment News has been compiled using publicly available information. Planet Ark does not take responsibility for the accuracy of the original information and encourages readers to check the references before using this information for their own purposes.