A group of local volunteers have joined forces with a group of marine scientists in an effort to restore Manly’s once thriving crayweed forests.

A group of local volunteers have joined forces with a group of marine scientists in an effort to restore Manly’s once thriving crayweed forests.

The work is being carried out in the Cabbage Tree Bay Aquatic Reserve, which was designated as a sanctuary zone in 2002 to prevent fishing and other disruptive human activities. Volunteers from the Friends of Cabbage Tree Bay group have joined forces with marine science project Operation Crayweed to bring crayweed back to the bay.

Crayweed is a temperate seaweed that has long formed dense forests on shallow reefs on the stretch of eastern Australian coast from Port Macquarie to Tasmania. These forests were once abundant on the Sydney coastline but disappeared during the 1980s due to poor water quality as a result of human activity.

Whilst water quality on the Sydney coast has improved dramatically since then as sewage and wastewater management techniques have improved, crayweed forests and the opportunities they bring for vibrant ecosystems have not returned.

Operation Crayweed was started in 2011 in an effort to give nature a ‘helping hand’ through an underwater gardening process. The group of scientists transplants healthy, fertile adults from existing crayweed populations onto rocks in deforested areas using a biodegradable mesh.

By creating patches of transplanted crayweed onto a reef and allowing these populations to sexually reproduce, the group aims to “restore forests of this essential species” in an entire site. In bringing crayweed forests back, the scientists hope to also promote other sealife to return such as crayfish, abalone and other fish and invertebrates.

With the help of volunteers, the group ‘planted’ crayweed at three different locations around Cabbage Tree Bay and will now await the appearance of offspring. 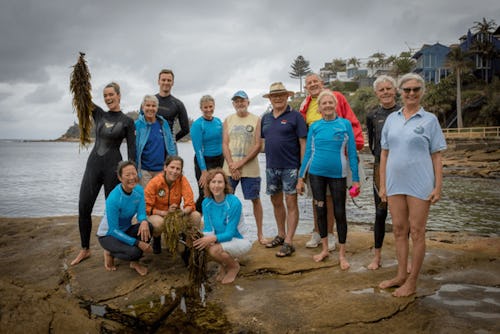