The nation's massive reforestation project, the Billion Tree Tsunami, has achieved its goal of planting one billion saplings.

The nation’s massive reforestation project, the Billion Tree Tsunami, has achieved its goal of planting one billion saplings in the country’s north-western province of Khyber Pakhtunkhwa.

Over the last 50 years Pakistan’s forests have been dramatically depleted, with the country’s total forest cover estimated to compose just 2-5% of total land area. Khyber Pakhtunkhwa was particularly affected by forest felling, resulting in increased prevalence of destructive and often fatal floods and landslides.

As a result, former cricket-star turned politician Imran Khan spearheaded the Billion Tree Tsunami in 2014 to restore the region’s depleted forest cover and fight the effects of climate change. With Pakistan listed among the six countries that will be most affected by global warming, the project was warmly received and supported by local communities.

In addition to the environmental benefits, the project also involved establishing a network of private nurseries, creating employment for young people and women in the province while boosting local incomes. 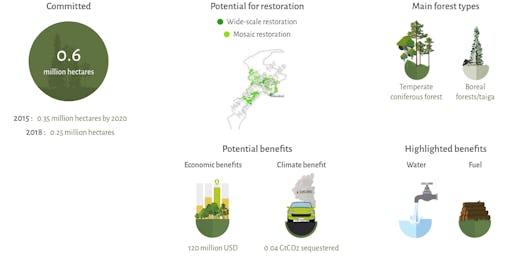 The popularity of the project has prompted the federal government to launch its own greening program called Green Pakistan, which will plant 100 million trees across the country over the next five years.