With more than 24 million trees planted, 1,245 tonnes of recycled paper sold and 38 million printer cartridges diverted from landfill, Planet Ark is proud to be 25 years young!

Imagine, it’s the early 90s you’re banging your blonde tipped head along to Nirvana on the radio, sipping on a can of soft drink. You are conscious that recycling is a good thing to do, but your only option to recycle the can, is taking it to one of the ‘Cash for Cans’ drop off locations. In 1992 when Planet Ark first began, that was the state of recycling in Australia. We’ve come a long way since then! Born out of a vision to empower all Australians to take positive environmental actions, Planet Ark has led a diverse range of programs and initiatives to protect the planet over the past 25 years. We are proud to be celebrating a quarter of a century as Australia’s pioneering environmental behaviour change organisation.

1996 saw the launch of National Tree Day and Schools Tree Day – Australia’s largest tree-planting and nature care events. Generations of Australians have participated, volunteering in their local communities, planting over 24 million trees. 1996 was also the year National Recycling Week launched. Now in its 22nd year, this highly regarded annual event continues to educate people on the benefits of recycling and stimulating behaviour change. The pioneering product stewardship program Cartridges 4 Planet Ark was launched in 2003, with a world-first zero-waste-to-landfill outcome. Since then over 38 million printer cartridges have been recycled in to road base, garden beds and many other products. The recycling website Recycling Near You was launched in 2006 and has helped millions upon millions of people recycle everything from e-waste to mobile phones to paint. The website has recently had a cosmetic lift with further development happening later in 2018. Take a look at it’s new look and let us know your thoughts. In 2010 our Business Recycling campaign was launched, a collaboration between Planet Ark and the NSW EPA with the aim of helping small and medium businesses recycle better. Wood can play a big part in helping tackle climate change when sourced responsibly. That’s why we launched Make It Wood in 2011 to encourage people to use sustainably sourced wood as a building material. In 2013 the Make It Australian Recycled campaign was born to increase recycling of office paper and encourage people to buy it back by choosing high-recycled content Australian made office paper. Since then we’ve created our very own Planet Ark 100% Australian Recycled Paper and we encourage all of our supporters to make the switch! We launched the Planet Ark Power program in 2017 to encourage businesses to adopt solar power for their own electricity use. We are now working with businesses, schools and councils to generate their own solar power and implement energy efficiency and storage technologies.

The Australasian Recycling Label launched in 2018. In conjunction with PREP and the Australian Packaging Covenant Organisation, this label informs consumers on how to correctly recycle/dispose of all their packaging.

We have had and still do have, many other projects on the go. We focus our energy where we believe we can make the biggest difference which is why from the very beginning we chose to work alongside businesses like you.

Thank you to all of our partners, sponsors, supporters, volunteers and staff members over the years as we wouldn't be what we are today without your ongoing support. 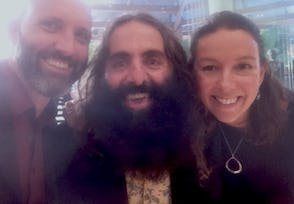 In March 2018, Planet Ark staff and partner organisations celebrated at the Melbourne Botanic Gardens with Jamie Durie hosting the event. Other guests included Daniel Tartak, CEO of Bingo Industries and Costa Georgiadis from Gardening Australia on the ABC.

We look forward to another 25 years of positive environmental action.

Error Occurred While Processing Request The web site you are accessing has experienced an unexpected error.
Please contact the website administrator.